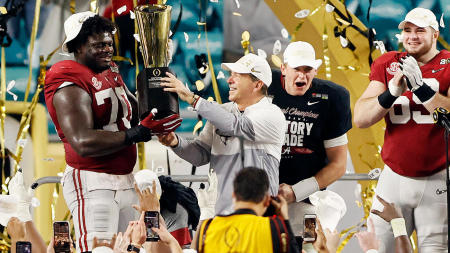 I’m not going to talk about COVID anymore. It’s done. Health officials are predicting a return to normalcy by the start of next season so I am going to stay optimistic and believe that to be the case. Sure, there were game postponements and cancellations but we finally can say that college football made it through a season stricken by a pandemic. There were a lot of things to like and a lot of things not to like but at the end of the day, we can say that we made it and look forward to next season. Here are a couple of major headlines that I took away from the season and want to give my takes on.

I’ll start off by saying that I understand a player’s concern for their own personal well-being. Playing in a bowl game is another chance to get injured and potentially losing out on a lot of money. Moreover, they might not play well, in the case of Florida QB Kyle Trask in the Cotton Bowl, which could hurt their draft stock and, in turn, they lose money as a result. When it comes to these college football players anymore, as we have seen in other sports, it’s all about the money. Sure, they want to play to win because winning translates to more notoriety which can translate to, you guessed it, more money.

Danny Kanell said it best in response to this season’s opt-outs. “If you start something, finish it.” The growing trend in college football is to not play in your team’s post-season bowl game. We can essentially trace this trend back to when start Stanford RB Christian McCaffrey elected to opt-out of his team’s bowl game to prepare for the 2017 NFL Draft. It was an iconic moment because McCaffrey was not injured nor was he suspended by his team or the NCAA. He was perfectly healthy to play in the bowl game. We are now witnessing the domino effect of that decision.

Of course, I’m not counting those players which opted out of the 2020 season altogether due to the pandemic. I’m talking about the notable players, or non-notable is some cases, who felt that playing in their team’s bowl game was a waste of time, energy, and not good for themselves regardless of the situation their opting out would put their team in. Florida football is a great example of this. The 2020 Florida Gators had a Heisman nominated QB in Kyle Trask who threw for three interceptions in the first quarter alone which led to Oklahoma blowing out Florida and winning the Cotton Bowl. Analysts were quick to make excuses that this was a result of the number of opt-outs Florida experienced. Now, I’m not going to speculate whether the score would have been closer or gone in Florida’s favor. I will comment that after watching that game, you cannot be in favor of the opt-outs. They are selfish, conceited, and are made without any consideration for your team. David Pollack took to Twitter to mention, “Opt out to me = Quitting. Not in my DNA.”

The world around us has become more materialistic and more about the individual rather than the team. I have harped on this for a long time as we have seen other “team” sports become more individualized by the season such as basketball. This player-first, team-second mindset will be the ultimate downfall of college football. The sport that, unlike the NFL or NBA or even college basketball, has had the luxury outside of the Heisman trophy in promoting a team rather than an individual. The fans of those teams are more likely to stick with their teams in this sport than any other. They don’t like the team because of a certain player but because that team represents who they are, where they are from. As a lifelong fan of Oklahoma Sooners football, I can definitively say rooting for a college football team makes your life expectancy shorter while also giving you the biggest highs you could ever have. That wonderful experience is in jeopardy with these opt outs. Unfortunately, that means that the heads of college football will have to cater to the player-first mindset in order to survive. Which starts with expanding the playoffs.

Joel Klatt summed the conversation about playoff expansion up very well. In fact, I think the NCAA should just go ahead and take this expert’s advice, make it happen, and then make Joel Klatt the head of college football. Simple as that. I will just reiterate is proposal here.

First, do away with divisions. Everyone plays the same amount of conference games (9) plus one non-conference, power 5 opponent. No more FCS opponents, they’re out the door. The two best teams in that conference will play for the championship and, just like college basketball, the winner will get an automatic bid to the playoffs and be ranked 1-5. . Now if we want to do 10, 14, or 16. We will add the remaining teams based on the rankings. This could be a mix of Power 5 and Group of 5. Doesn’t matter. For teams like Notre Dame or BYU, independents, they are allowed 2 losses. The ultimate goal is to do away with the current committee subjective criteria with that stupid eye test and implement these objective requirements such as winning your conference and/or only having two losses against worthier opponents. Again, it’s hard to explain and a lot of this will have to be decided on the fly.

I personally like the idea of a 14 or 16 team playoff. A 4 team playoff plus the eye test is contributing to the ruining college football. A 14 playoff would be very similar to what we are seeing with the NFL this year. The top 2 seeds would have a bye and the rest play a first round game, the bye seeds would play the lower seeds the next round, and so forth. Now, you could always make the bowl games whatever round with the New Years 6 being the final 6 games. I really don’t care. Same with a 16 playoff series (my favorite). Making the regular season more valuable and exciting and making the playoffs worthier of players actually playing in the post-season instead of opting out is a must that could help save college football.

I made up this issue but it’s honestly a serious question with 1. The expansion of the college football playoff system and 2. the question of what Notre Dame does next. With this pandemic, we saw a number of teams flying hundreds of miles to play an opponent. This very same concept was discouraged with the cancelation of non-conference games so teams would stay closer to home, avoid travel, and help discourage the spread of the virus. However, the way the conferences are aligned, geographically speaking, made this concept utter nonsense. We have to go back to geography when it comes to conferences. An east coast team should not be playing in the Big 10. A midwest team should not be playing the SEC. A Mid-Atlantic team should not be playing in the Big 12. You see my point. You lose great rivalries and excitement as a result. Missouri-Kansas gone. Oklahoma v. Nebraska gone. Penn St. v. Pittsburgh gone. Texas v. Texas A&M gone. And so much more. Now, we could easily trace this atrocity back to the break up of the Big East. A basketball conference shook up the college football world for the worst.

Of course, I’m not saying restructure the whole power 5. I’m just saying this could help make all conferences more enticing for high school players instead of just a few. It could also make for an increase in regional fandom and viewership instead of having someone from the Midwest rooting for Alabama or Clemson because they are always on. All I am saying is trim the fat and increase parody. Once you do away with the conference divisions in college football, this would be the perfect time to restructure the conferences in such a way that is beneficial for both the programs and conferences as a whole.

What’s Next? Just the Downward Trend of College Football

Profiting off Name, Image and Likeness. This has been the cry of the college football “gurus” for a number of years now. A lot of it is rooted in the same issues I discussed with opt-outs. Now, it doesn’t look like we are going to be seeing that legislation go through any time soon after breaking news as of yesterday that the legislation will be tabled until further notice. I have some thoughts on the best way for colleges to “police” this concept with the threat of boosters, agents, and such, however, that is another conversation as it is not prevalent for the moment. I will say that college football has created a “pipeline” to the NFL that all kids believe they can get to if they stick to this “pipeline.” Attend the right camps, play in certain leagues, attend certain high schools and then college, use this trainer, etc. And when that doesn’t workout, when they do not get drafted high enough to make any money or they do not get drafted at all, they can’t go back to college and really have no where to turn. Colleges have to emphasis the importance of getting that degree and laying down your roots. By that I mean, working hard both on and off the field, making connections, staying humble, etc. You will be taken care of if the NFL does not work out the way you want it to.

Ultimately, all of these things combined have started the downward spiral of college football. Less meaningful regular season games plus virtually no parody in the college football playoff plus the sense of entitlement and need for instant gratification have started this trend. Oh, and let’s not forget the transfer portal when it is used in a way where kids do not want to compete for a starting position, they want that instant gratification and feel entitled for a starting position. If we got anything from the 2020 season it’s that college football needs to act now and swiftly make these changes if the sport is to continue its aroma of tradition, excellence, and creation of some of the best sports moments we have ever witnessed. I, for one, am very optimistic about the future. I also know that I am not the only one who feels this strongly about these issues.